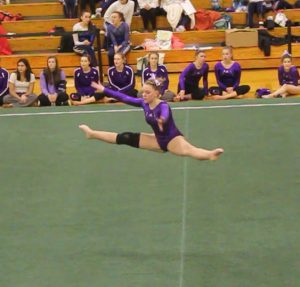 To see teen gymnast, Janae Small, compete is to watch energy and grace in motion. A petite teen with a broad smile, Janae has embraced gymnastics with passion from the moment she started as a child in 2005.

Janae makes tumbling seem effortless as she moves through her routines in competition.

Though, we all know it isn’t effortless—and is often dangerous.

In November 2017, Janae suffered a severe injury, as she performed the last tumbling pass of her floor exercise event. The meet, held at the Downers Grove North High School, was the season opener against Downers Grove South, and all of the gymnastics fans in Downers Grove were there.

As Janae was finishing her routine, she landed with such force that she injured her ankles and needed immediate EMS response. She was carried off the gymnastics floor on a stretcher, with her right foot at a 90-degree angle.

Due to the severity of the injury and the level of pain she was experiencing, Janae was rushed to Good Samaritan Hospital where the doctors in the emergency room determined that she had suffered a severe dislocation of her right ankle.

Calling in the expert

Dr. Steven Louis, Director of Orthopaedic Trauma at Good Samaritan, was called in immediately. Dr. Louis, a board-certified orthopaedic surgeon and fellowship-trained in the area of trauma, explained to Janae’s parents that Janae’s injury was exceptionally rare— and only the third such injury that he had seen in his entire career explaining the other two injuries he treated were adults.

Janae was suffering a total dislocation of the talus bone from all of its surrounding joints, which include the talonicular, tibiotalar, and subtalar, with no bone breaks. The talus bone is the lowest part of the ankle joint and connects the foot to the tibia and the fibula, the bones that comprise the upper part of the ankle.

Dr. Louis explained that healing from this particular injury would be fraught with challenge and that he needed to get Janae into surgery immediately—time was of the essence.

Janae’s ligaments had been severed in the landing, and her leg bone had almost punctured the skin, so he felt it was very likely the arteries feeding the talus bone had, in all likelihood, been severed as well.

With injuries to the talus bone, orthopedic surgeons are concerned about two levels of potential complications: The risk of post-traumatic arthritis, which can impact mobility in later years, and the possibility of avascular necrosis, which can cause damage to the bone if healthy blood flow is interrupted by injury.

What this meant was that the prognosis for the talus bone receiving enough blood to heal properly was not good. Under the best of circumstances, recovery would take about a year and data on blood flow to the talus bone wouldn’t be available for six weeks to two months.

As Janae was being wheeled into surgery and out of earshot, Dr. Louis told Janae’s parents that they would need to begin processing that this injury would very likely end her gymnastics career. He stated that Janae’s quality of life was at risk if the talus bone did not receive blood to heal.

Janae’s mother remembers it well, “All of this information, was a lot to process in a traumatic situation. Yet we felt that Dr. Louis presented it to us very clearly and put us at ease with his gentle humor. And, while this news was something no parent wants to hear about their child, Dr. Louis had a way of delivering it factually and compassionately.”

A surgery that could take hours or minutes

Dr. Louis told Janae’s parents that the surgery could take hours, or it could take minutes. As it turned out, the operation took only twenty minutes, and Dr. Louis was pleased with the results.

Dr. Louis also told Janae’s parents that in the chaos of the ER and the focus on Janae’s injury to her right ankle and foot, that the doctors had not realized that she had also sprained her left ankle—a grade three sprain. But, overall, he was confident that Janae’s situation was improving and stated that he would see her and her parents in the morning.

As Dr. Louis remembers, “Every clinic after her injury I noticed how apprehensive Janae was about the news but she always left with a determination just to get better, follow instructions and remain hopeful that she will be able to get back to competitive sports.”

Applying self-discipline and determination for the win 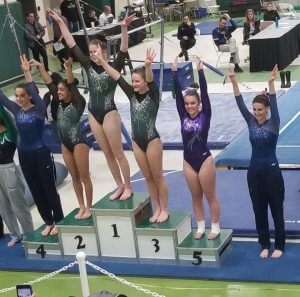 Throughout her lengthy recovery, she applied the same self-discipline and hard work she has given to her gymnastics. States Dr. Louis, “Even though Janae was very determined to follow my instructions, it was the support of her parents that provided her with the solid family platform of support and belief to reach her goal of competing again.”

Dr. Louis remains impressed with Janae—and her family—and their commitment to healing. “I think it is amazing that Janae has recovered so well and is back participating at a high level in competitive sports. It is a testament to her and her family’s determination to build back to full health by following direction and working very hard to recover.”

Janae’s hard work is paying off. She has rebounded, is back in gymnastics, and even won 5th All-Around at the Junior Varsity West Suburban Conference in December of 2018— a considerable accomplishment given the severity of her injuries and the rigors of her recovery. In the private club competing for Illinois Gymnastic Institute, she won 1st All Around in two meets this spring!

As she says, “Dr. Louis was such a pleasure to work with. I never wanted to go to my doctor appointments because my injury was so bad and it just made me nervous that things might not be the way they were supposed to be.” But, she adds, “Dr. Louis was always supportive and reassuring during the whole process. He also always made me laugh.”

That laughter, that expertise, and a teen’s dedication to her sport have made a recovery from a rare talus injury a happy news story for all concerned.