Dr. Steven S. Louis is an integral part of the Hinsdale Orthopaedics team since 1997.  Dr. Louis’ exceptional surgical skills are complemented by a personable style and dedication to the highest quality patient outcomes and satisfaction. He is a board certified orthopaedic surgeon and is fellowship trained in the area of trauma. 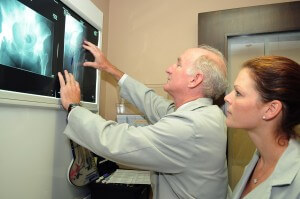 This can happen when a  bone is not well stabilized or doesn’t receive ample blood to allow the new tissue to grow, or if the fracture has an infection. Non-unions occur for a variety of reasons. They are caused by patient-related factors, fracture-related factors and fixation-related factors.

The FDA defines non-union as “established when a minimum of six months has elapsed since fracture with no visible progressive signs of healing for three months.” This serious condition is not common but can lead to further complications. If a patient feels that a previously fractured bone did not heal properly, he/she should consult an experienced surgeon like Dr. Louis, who has years of experience treating non-unions.

What Are The Signs Of Non-Unions Of The Bone?

The signs of non-union include persisting pain and/or tenderness at the fracture sight, lack of mobility and the inability to resume daily function with that particular body part. Slight warmth of the skin and swelling may be detected if at the fracture site.

The two major types of unions are hypertrophic and atrophic.

Complications such as limb shortening or a gap between the fracture ends may be seen more frequently with atrophic non-union as treatment initially resects non-viable bone back to healthy bone.

What Are The Treatment Options For Non-Unions Of The Bone?

Treatment of non-unions may be complemented with a synthetic bone graft or one that is obtained from the patient or from another individual (also known as a donor graft).  Newer approaches are using special proteins called recombinant bone morphogenic protein and bone marrow aspirates. Bone marrow may be harvested from the individual’s pelvic bone or femur and injected directly into the fracture site guided by external imaging.  If there is an infection, it will require surgical removal of any infected bone or tissue, followed by intensive antibiotic treatment.

Non-union conditions often require a long healing period after surgery, and depending on the physical condition of the patient and the extent of the complication, it can sometimes take a few surgeries to fix the problem.  Rehabilitation often requires a patient to not bear weight on the affected leg for several weeks, similar to when the initial injury occurred.